Your first and most obvious option for hydration is a water bottle, but a reservoir lets you go hands-free and bring a lot more water with you, which is important if you’re going to be out on the trail for several hours.

You do have to have a backpack to take advantage of the wonderful world of bladders (add that to the list of things I thought I’d never say). The first and most obvious step to bladder shopping is making sure you’re buying the right size. For a basic backpack, 1.5 liters will be plenty. When in doubt, consult a store employee.

As I was shopping, an REI employee informed me that all the brands of reservoirs are really about the same. While I would eventually find out that this is not true at all, at the moment I simply went with the cheapest one – the Osprey Hydraulics LT Reservoir. 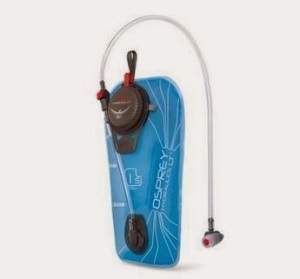 The Osprey had a handy dandy lip on the opening of the reservoir that you can hold while awkwardly trying to fill up at your kitchen sink. I also really liked the mouthpiece (the part you suck water out of), which came with a magnet to keep it attached to your backpack strap for easy access.

The issue I had with the Osprey reservoir is a BIG one – it leaked all 1.5 liters of water into my backpack right before we left to go hiking. Twice. Since REI has an awesome return policy, I exchanged the reservoir for a new one thinking it was just a bad egg. Then the second one did the exact same thing, and I decided to try a new brand.

My next stop (because it was only marginally more expensive) was the Camelbak Antidote 50 fluid ounce (or 1.5 liters) reservoir. Honestly, I didn’t like this one immediately out of the box. Despite claiming it holds 1.5 liters of water, it was way smaller than my previous reservoir. To be sure, I emptied my .75 liter water bottle into it and promptly filled the reservoir almost all the way up. To make matters worse, it immediately leaked all of that water into my backpack (are you seeing a theme?).

Perhaps I’m just cursed with bad bladder luck. My boyfriend has an Osprey that he loves and never has issues with, and I do love my Camelbak water bottle because it never leaks.

Nevertheless, I was beginning to get a bit frustrated. I dutifully went back to REI to return the Camelbak (a great reason to shop at REI…they let you return anything within a year, even if you can’t figure out how to stuff it back into the overly complicated packaging). Platypus was the first brand in the aisle, so I made the highly analytical choice to grab that one since it was closest.

On my way to the cash register, an REI employee informed me that his friend accidentally ran over his Platypus bladder (the brand name just works too well with the word bladder) with a truck and it had yet to leak. Promising!

At home, I filled up the Platypus Big Zip LP and put it in a big bowl overnight to see what would happen. The reservoir passed that test, so I put it in my backpack along with some clothes and snacks to simulate what I usually stuff in there. There was no backpack leakage when I came home from work, and in the 10 months that have passed since this was originally posted, I’ve never had a leakage issue. I have officially proclaimed it the winner.

One last note – I don’t love the Big Zip interface, but I can live with it since all I really care about is that the thing doesn’t leak. That blue piece of plastic slides off, and then you open the top like a Ziploc bag, which makes it a little difficult to fill up since there isn’t a plastic rim to hold on to like the Osprey model. You get used to it, but it’s not as ideal as Osprey’s set up.

However, a nice feature of this reservoir is that there is a piece of plastic on the inside that connects the front and the back. This keeps it from ballooning out once you’ve filled it up and instead makes it stay nice and flat in your pack. This is especially helpful to me since I like to push my backpack to its limits by stuffing as many items in it as possible. 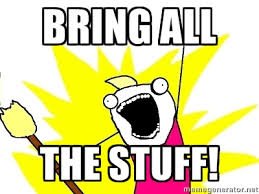 4 thoughts on “Gear Guide: The best reservoir to carry your water on the trail”

This site uses Akismet to reduce spam. Learn how your comment data is processed.